Improve your chess from everywhere

You are always one square ahead

Book Rashad Babaev for your camp or lecture.

Get 20 minutes of consultation from Rashad Babaev

Rashad was born in Baku, Azerbaijan. He became a Grandmaster in 2007 and is the winner of many International tournaments. As a young player he had esteemed coaches, including Oleg Privorotsky, the teacher of World Champion, Garry Kasparov. He has attended seminars of World famous chess coach Mark Dvoretsky in Moscow.
->Read more

In order to improve your game, you must study the endgame before everything else.

In this 6-hour chess endgame course, experienced coach Grandmaster Rashad Babaev trains you in the skills you need to successfully master the endgame. Master the principles of practical endgame play, learn how to win with dynamic sacrifices, dictate the transition to the endgame and much more.

Learn how to play against the Paulsen Sicilian. 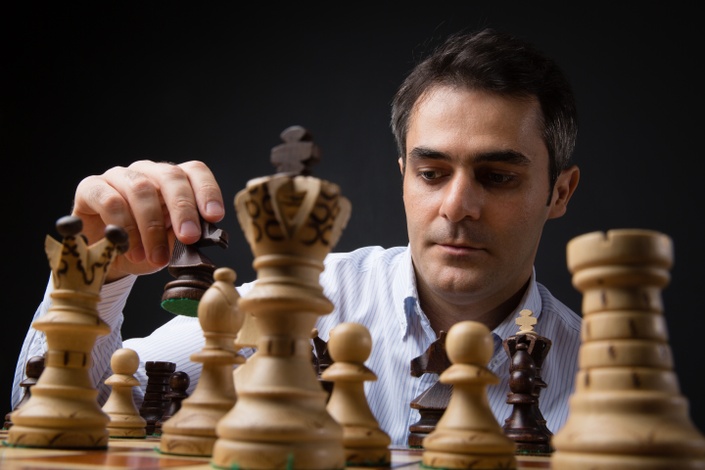 Learn how to play chess with International Grandmaster

Start playing chess. Learn basics of chess board, how to move pieces and basic rules. Course is designed for absolute beginners who are new to chess.

How to systemize opening lines.

Choose the once which are similar by the pawn structures. For ex: KID-KIA

Should I study games of World Champions.

It is always helpful. Every good player should know and study games of World Champions.

Is Sicilian Defense too advanced for intermediate player.

Should I use computer analysis in order to analyze my games.

Computer programs can be very helpful. I like to compare analysis with computer program. Very tactical positions can be checked with program as well.

How to play in the endgame.

What can I do in order to avoid getting into time trouble.

This is a big topic in chess and many players suffer with this issue. The best way is not to go over the calculated variations over and over. Be confident and calculate things only one time unless you feel position is very critical.

How should I play positions with 2 bishops advantage.

Bishops like space, open positions. Keep game open. This is the main strategy with 2 bishops advantage.

I know Rashad from our childhood. We grew up together and played many interesting games. Rashad was very sharp, active, creative chess player and he had attitude to win the tournaments he was playing in. His strong character, high skills and passion were leading him to win many tournaments. Besides his practical achievements, Rashad also known as a great coach. He has big contribution to Azerbaijan and World Chess. He has trained many strong chess players. He is also known as an expert in some opening lines, such as KID. I can characterized Rashad as a good friend, talented, honest, and very responsible person.

Rashad is a top coach. He was recommended to us by a parent whose child won various state and national chess tournaments. Rashad is a thorough professional and passionate about teaching chess. He has streamlined chess coaching and built an online framework where kids can do their assignments, play tournaments and almost everything on his website. It shows his commitment to excellence. I would strongly recommend Rashad to anyone who is serious about excelling in chess.

I believe a great coach must have a good chess career. Otherwise, the coach wouldn't know the subtle nuances of this ancient game. I remember well when Rashad won the Azerbaijan national championship which was a prestigious event in 2009. Rashad beat me in an important game which helped him to win the title. I was very upset at that time but now I understand that that game was a great lesson for me and helped me in my career. I strongly recommend getting coached by Rashad to anyone who is curious about enhancing their level.

My son had stuck on 1800s for almost a year when a friend recommended Coach Rashad. After we started working with Coach Rashad, he helped my son with calculation, game analysis, and openings. Within six months, my son's rating went up to 2100s. Coach Rashad is very dedicated and encouraging. He has a way to motivate the kids. He also has good communication with the parents. We are lucky to have him. He definitely played an important role in my son's growth in chess.

To know and work with Rashad is an honor. My kids have been learning with him regularly since they were 4 years old. And we are together for life! He is a phenomenal chess coach and his unique teaching style allows students to compete and win national and international tournaments. More importantly, he also inspires kids to love learning, respect stratagem and to approach life with confidence. Honestly, praising Rashad's influence is beyond words. I am thankful my kids and I found him!

The best of the best

We have had the privilege for both of our boys to have Rashad as their Chess instructor for the past 4 years. He is professional, structured with compassion ,and motivates them to challenge and do their best. My older one says if Rashad is not his mentor he doesn't know if he would continue to have the dedication and commitment to continue, highly recommend working with Rashad to improve your chess skills.

Beginner to USCF NM in 18 months!

Hi Rashad, Just wanted to express our gratitude to your hard work and your systemized teaching approach, which has helped Ryo to improve very fast. The speed that Ryo has progressed in chess was impressive, even to us parents' eyes. Ever since you started coaching him from March 2018, he has improved from a beginner who was losing to random opening traps to a USCF National Master, all in less than 18 months! I think your rich teaching experiences and patience has helped Ryo tremendously. Ryo is eagerly looking forward to learn more from you every week. We just wanted to let you know how grateful and lucky we are, to find you as his chess coach! Cheers, Hua

In the decade that I have known him, Rashad has shown himself to be a very energetic and active person, both on the chess board and in life. His approach to teaching reflects his own unique and interesting style and understanding of chess. In my years of teaching chess in NYC, I have heard many positive feedbacks about his coaching from students and fellow teachers. I wish him all the best and success to his students!

After Jason participated in a camp taught by GM Babaev early 2017, GM Babaev started giving Jason weekly online lessons immediately because we were very impressed by the passion and knowledge of GM Babaev in teaching. Jason was able to improve his USCF rating from 1800 to 2100 within about 12 months. GM Babaev has helped significantly to improve Jason in chess opening, positional understanding, strategic ideas, and many more. We are fortunate to have GM Babaev teach Jason profession chess!

Rashad has always done great work for Chess.com! His video lectures are top quality, and his reputation as a quality chess trainer precedes him!

Rashad, has the eyes of a very serious and focused teacher. His look is very compelling and certainly draws the reader to him. In my personal observance of Rashad teaching my boys, I find him to be an absolutely wonderful teacher for the youth. He is very kind and patient and yet he demand focus and concentration. Instruction is always very clear and precise with positive encouragement and recognition of improvement. My two teenage boys are very good chess players and have enjoyed instruction and their personal association with Rashad. I appreciate you very much and hope the boys continue with you for a long time into the future. Thanks, Mary

Rashad has coached my son for many years. He has inspired a love of the game that has sustained my son through many tournaments and other chess activities. We appreciate his attention to both chess tactics and other aspects of performance. Thank you!

Boro's gambit. Chess Simul at the Boro of Tysons. November 2021.

Get news from GMPrep in your inbox

Boro's gambit. Chess Simul at the Boro of Tysons. November 2021.